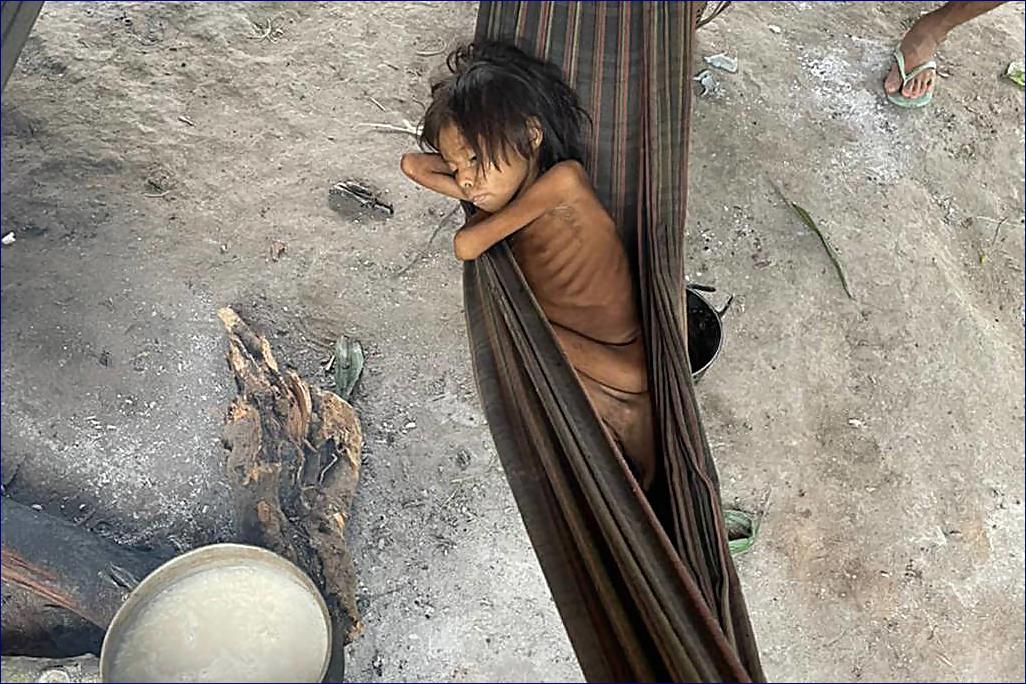 This photo had to be smuggled out. It was taken on 17th  April, 2021, but the photographer said he is now in hiding to avoid being targeted by the violent fans of the genocidal government of Christian fundamentalist autocratic president Jair Bolsonaro, who has been punishing anyone who dares to try to defend the native Indians of Brazil or the Amazonian rainforest's preservation. She is 8 years old and weighs 12 kilos.

She is malnourished.  This girl is not the sole case. According to local native Indian informers, all children in the tribe Yanomami of Maimasi, in the federative state of Roraima, are in a similar situation, while the adults are also in poor health, without access to enough food because the area was invaded by 20 thousand white explorers after Bolsonaro lifted the laws and regulations that were used to punish invaders. The tribe has only 806 inhabitants. They are basically besieged not so differently as in Leningrad during the World War II, or the Gothic sieges of Rome in the 500s. As a consequence, the tribe is unable to hunt, fish or collect fruits from the forest because they are being hunted like animals by the invaders. And the police are not coming even to collect the murdered bodies, which are then not officially counted anywhere, keeping the genocide hidden.
Gold diggers and wood exporters - whose exploits go mainly to Great Britain - are murdering native Indians without any consequence. Every time someone in Britain buys wooden furniture, there is a high possibility it indirectly came from the Amazon. And the Brits also consume mayonnaise, potato chips, batter for coating their horrific fried food, or even shampoo, all of which is made with palm oil that comes from these illegal settlements. Recent laws and regulations have failed to apply financial fines to anyone of those who were caught disrespecting the very timid and limited bans related to imports from Brazilian endangered areas, for the documentation is feeble and easy to falsify already before leaving the tropics.

The organization that was created to PROTECT the natives, called Funai (National Foundation for the Indians), is now ATTACKING them. In an Orwellian twist, they are now suing natives who denounce murders and even called the federal police to arrest two native Indian leaders who criticized Bolsonaro on their social media! The foundation also promoted the illegal surveillance of the cell phones of Almir Suruí, who is the leader of the natives of the North region, and Sônia Guajajara, who was a vice-presidential candidate nominated by the Green Party in a coalition with a small social-democratic party. They were both summoned to the police station to be interrogated about their criticisms of the president. Guajajara, for having criticized Bolsonaro in Europe, is to be persecuted for international defamation of the country, a crime similar to treason.

This past Monday, a group of 20 illegal gold-diggers sailing in 7 boats ambushed the tribe of Palimiú, indiscriminately shooting towards all of them, including 57 children, killing five natives for no reason. The police refused to investigate the case. A few weeks ago, another 8 natives were killed by invaders and the police refused to even register the deaths.


It's open hunt season against the native Indians. While autocratic populists are taking advantage of the fatigue and impotence created by the pandemic and going ahead with their geopolitical advances and discriminatory prejudiced lawmaking, Bolsonaro is finishing up the ethnic cleansing that was attempted by the military dictatorship (1964-1985), which wanted to decimate the indigenous people to turn the Amazon into a money-making Eldorado. Pressure from the Jimmy Carter government, with sanctions and embargo threats, forced the military to cancel their "asphaltization" of the rainforest and a young Bolsonaro, who had been already lined up to a "mission" in the Amazon, saw it canceled in 1978 because of the American president's demand.

Bolsonaro said last week, in a meeting with agricultural industry leaders, that his government will make sure that the native Indians join the exploration, production and sales of goods that their land has to offer and that he will continue to forgive and forbid any fines, and act against police or court procedures aimed at those who want to "work together with the natives to make money, to get a better life - nobody wants to live among trees, they also want cars and apartments like us, but the Europeans force them to live like wild animals by insisting they keep their traditions, which led to nothing but poverty. No, no, no! They are Brazilians like you and me and they will be like all of us, not like those foreigners want them to be. The Amazon doesn't belong to them, it belongs to us. Not to the natives, not the Europeans, not the Americans, but to us, all of us. Gentlemen, go ahead, the days of the criminalization of progress are over". 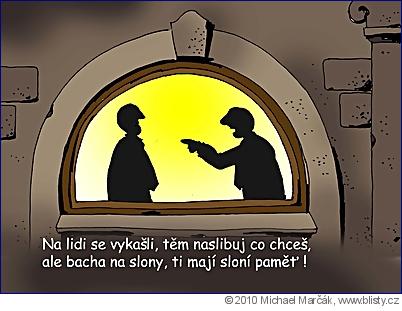 Muriel Blaive In the Stadium of Life, Normalization Was an Olympic Pool of Murky Waters 2667