The widely-read alarmist, racist and xenophobic website Parlamentní listy [Parliamentary Newsletter; this is a misnomer, the website has nothing to do with Czech Parliament] which systematically whips up anti-muslim and anti-refugee sentiment in the Czech Republic, has been praised by Jiří Ovčáček, the official spokesperson of Czech President Miloš Zeman, as a "highly pluralist medium, an island of positive deviation in the sea of one-sided media mainstream."

By praising Parlamentní listy, Ovčáček explained why the Czech President Miloš Zeman regularly gives long, exclusive interviews to its reporter Radim Panenka. Several years ago, Panenka was a member of the extreme right wing "National Party" which became notorious for its campaigns against the Roma and against all minorities in the Czech Republic.

The National Party became infamous during recent elections into the European parliament when it offered "the final solution of the Roma question" within its election programme. During the election campaign, it used a flag on which white sheep kick away a black sheep against the background of the Czech national colours.

"We are the only people who have the courage to stand up and say that there are murderers, pedophiles, deviants and sadists in all the groups of the immigrants," said Zeman's favourite journalist Radim Panenka at a demonstration in Prague in March 2008.

Panenka now dissociates himself from this statement. Nevertheless, the following are the current headlines in Parlamentní listy, a "highly pluralist medium, an island of positive deviation in the sea of one-sided media mainstream," according to Jiří Ovčáček, the official spokesperson of the Czech President Miloš Zeman:

A Philosopher Speaks: Zeman sides with the people against the ruling plutocracy. If we want to survive, we MUST be xenophobic. We will have to wage a bloody war against  the muslims

Islamists are a murderous bunch and we fear the loss of our self-determination in the land of our ancestors. But the people in the street will force the politicians to do the right thing, even if we will have to go backwards

Migrants are here. I am upset by the attitude of the Czech government. Merkel is finished, says Slovakia after a refugee has been shot there

Perversion! Depravity! We have found out how many millions you are paying for the government "HateFree" project

We are cutting a branch we are sitting on. Where all this will lead to. Serious information about the further developments of the refugee crisis

The onslaught of hate speech on Parlamentní listy has been intense over many months. Here is a sample of headlines from September 2015:

- Václav Klaus in Bratislava: These are not refugees, do not call them thus. That word is a naivist, European concept

- Colonel Skácel on 9/11: Two high rises could not have collapsed after being hit by airplanes. Absolute nonsense. Terrorism is a myth

- Europe will go black. Fuck it, swore citizens during a meeeting. And the Czech immigration boss suprised people "We do not moan, so we will be punished."

- Billions of immigrants. Horrifying chaos, conflicts, war and death and catastrophe in Europe. Someone is organising this!

- 100 million immigrants will arrive, according to estimates. This is the end of Europe. The government must rebel against the threats and the crude blackmail from the EU

- Sociologist Petr Hampl: We have the right to deal with the refugees as though they were aggressors. The traitors of the Czech nation are helping them to exterminate us like the whites have exterminated the Red Indians. The Czech Human Rights Ombudsman, she is the real neo-Nazi

- This is death. There will be bloody tragedies. Hatred of the Czechs, monstrous behaviour, treachery, suicide, collaborators, chaos

- Lord Mayor in a Berlin immigration quarter: The immigrants rule us with a rod of iron and terrorise German children, adults and pensioners. They teach their offspring to fight against us

- Disgusting, we must leave the EU. Czech politicians' reactions against the quotas

The Czech Republic does have laws against hate speech and spreading alarmist news, but the Czech police is mostly not investigating these crimes and they are not being prosecuted. 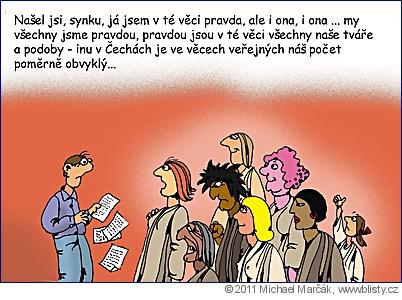